This article originally appeared in the M&E Journal: The Smart Content Issue, June 2017.

Abstract: 2016 was known as “The Year of VR.” With the release of the Oculus Rift, the HTC Vive, the Sony PSVR and the Google Daydream View, as well as the increased distribution of the Samsung Gear VR and Google Cardboard mobile headsets, the VR consumer base grew dramatically. 2017 offers more enticements to the consumer in the form of higher profile content as big-name creatives and companies commit to creating compelling experiences for both the home and out-of home markets. In order for the ecosystem to thrive, VRcontent in 2017 must meet the demands of an increasingly sophisticated consumer base. VR experiences can no longer depend on the “wow” factor, but must be well conceived and expertly finished to higher standards of quality to keep viewers immersed. In short, if 2016 was “The Year of VR,” 2017 must be “The Year of Quality VR.”

The current wave of virtual reality began in August of 2012, when Oculus launched a Kickstarter campaign for its first Rift headset, the PC-based DK1 (Development Kit 1). In 2014, at the Google I/O conference, Google introduced Cardboard, its mobile phone-based VR viewer. The following year, Samsung released its own mobile VR headset, the Gear VR. However, it wasn’t until 2016, with the release of the Oculus Rift CV1 (Consumer Version 1), the HTC Vive, the Sony PS4-based PSVR, and Google’s updated mobile VR headset the Daydream View, that many felt VR had finally arrived.

At CES 2017, Samsung Electronics America president Tim Baxter confirmed that 5 million Gear VR headsets had been shipped, while on Feb. 28 Google tweeted that 10 million Cardboard viewers had been shipped. Although Facebook/Oculus, HTC and Sony have not released sales figures for their head mounted displays (HMDs), research firm Super- Data estimates that those devices shipped a combined 1.4 million units in 2016, with Google’s Daydream View adding an additional 260,000 to that figure. It’s interesting to note that of the estimated 16.6 million VR headsets in the hands of the public, the vast majority – 15 million – are mobile phone-based units.

The more advanced PC-based headsets, while offering an incredibly immersive experience by making effective use of software game engines, are rather expensive for the casual consumer. Mobile phone-based VR, on the other hand, is anything but pricey: the Google Cardboard can be had for as little as $5, and the Gear VR costs $100 and was also offered as a free incentive with a new Samsung phone. However, as these units depend on the processing power of the smartphone, they cannot match the level of the software-based experiences offered by the Rift, Vive and PSVR. Better suited to mobile VR, however, are 360-degree video-based VR experiences, which — when they are conceived, captured, and finished with care — offer extremely compelling storytelling.

History tells us that VR hardware – like all consumer technology – will ultimately increase in performance and features while dropping in price. In the shorter term, however, compelling content will do more to drive repeat usage and new sales. 2017 promises much in the way of quality experiences.

The list of big-name studios and talent investing in VR content creation is truly impressive. Jaunt, the cinematic VR company backed by Disney, which in 2016 released the five-part VR series Invisible by director Doug Liman (Edge of Tomorrow, The Bourne Identity), announced the launch of five new VR series at the 2017 Sundance Film Festival, following deals with William Morris Endeavor and the Creative Artist Agency. Twentieth Century Fox, which has been on the forefront of creating VR content based on its current IP, such as 2016’s The Martian VR Experience, announced a partnership with Within, the VR content studio responsible for several standout New York Times Magazine documentary pieces. Within and Fox are also teaming with Annapurna Pictures to create I Remember You, a VR film developed by director Spike Jonze (Her, Adaptation, Being John Malkovich). The prospect of Being John Malkovich’s director bringing his unique vision to the VR medium has the serious potential of leading to the “killer VR app” that Hollywood is waiting for. Fox also announced a deepening of its partnership with Felix & Paul Studios, the team responsible for numerous noteworthy VR pieces created for Cirque du Soleil, as well as experiences featuring the former President and First Lady, Barack and Michelle Obama.

Hollywood isn’t just looking to the living room to capitalize on the new format of VR. IMAX Corp. has committed $50 million to produce “a new level of premium, high-quality content” for use not only across established VR platforms, but also more notably in its IMAX VR Experience Centers, per CEO Richard L. Gelfond. Dreamscape Immersive, backed by investors Steven Spielberg, Warner Bros., 21st Century Fox, Metro-Goldwyn-Mayer, and the Westfield Corporation, announced it had raised $11 million toward its goal of opening a VR multiplex in a Los Angeles shopping mall, showcasing original VR experiences, as well as content based on theatrical IP.

For most consumers, being immersed in a virtual world for the first time is an impressive experience. Even the most novel experience can become mundane, however. After habituation has set in, consumers need truly compelling content to continue watching. Although 2017 promises to fulfill that promise, high profile content must also be distraction-free. Consumers wowed by a fully immersive field of view may initially overlook video or audio anomalies, but once they have their “VR legs,” consumer expectations will rise, not only for the artistry of the stories told, but also in the craftsmanship of those stories. Every technical distraction represents a break in the immersion of a VR piece.

An array of cameras is used to create a field of view that literally surrounds the viewer in 360-degree video-based VR experiences. The feed from each camera must be “stitched” to the next camera’s view, and frequently this can lead to visible errors known as “stitch lines.” When stitch lines are visible, especially as characters or objects cross them, it reveals to the viewer the sleight of hand required to capture and present video in 360-degree, pulling them out of the narrative. 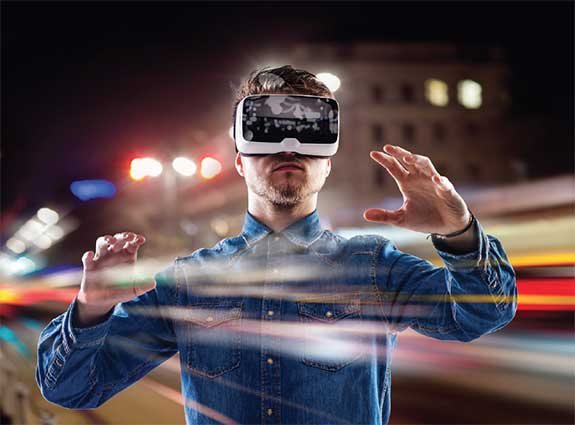 Since VR presents a fully immersive image, obscuring production equipment and personnel is uniquely challenging. In VR, if the viewer looks straight down, what will they see? Hopefully not the tripod upon which the camera was mounted. What if they spot the director hiding behind a tree? If production equipment is painted out via VFX, are there any noticeable artifacts? The discovery by the viewer of any equipment, crew, or removal artifacts destroys the illusion of being placed in another world.

Although the telltale feature of VR is its 360-degree field-of-view, audio makes a significant contribution to the immersive quality of a VR piece. A fully spherical soundscape emulates our natural hearing abilities. Audio that is not spatialized correctly – for example, a sound fixed in the VR space which does not move when the viewer moves their head – can trigger the feeling that something is off with the experience. Additionally, when the viewer can literally look anywhere, even opposite the narrative focus, a localized piece of sound can serve as a cue to direct the viewer to where the creator wants them to look, while incorrect or missing spatial information can detract from the sense of presence felt by the viewer.

One unique and unfortunate characteristic of VR is its capacity to induce negative physiological effects in the viewer. The desire to transport consumers into novel and exciting experiences must be tempered with an awareness of viewer comfort. Negative triggers range from the obvious, such as strapping a 360-degree camera rig to the top of an acrobatic airplane, to the not-so-obvious action of tilting the camera up or down so the perceived horizon differs from the actual horizon dictated by the inner ear of the consumer. Although the phenomenon of habituation may also apply to consumer tolerance of potential VR discomfort triggers, the risk of inducing nausea, disorientation, and postural instability must be minimized as much as possible, or at the very least, consumers must be clearly informed as to the comfort level of a VR piece before they decide to engage in it.

Along with identifying potential physiological distress triggers to inform consumer messaging, all video and audio errors must be removed to effectively maintain the immersion of a VR experience. Before distracting errors can be eliminated, they must first be discovered and noted. As VR production increases along with consumer demand for more content, the charge of evaluating VR experiences with the strict mandate of detailing errors is best-suited for third parties specializing in the art of home entertainment quality assurance, with a focus on virtual reality experiences.

Ramón Bretón has 15 years’ tenure at 3rd i, a pioneering company in the field of quality assurance for the home entertainment industry. Prior to this, he spent ten years in the music business as an audio mastering engineer, giving him over twenty-five years’ experience contributing to quality entertainment for the consumer.

In addition to the physical journal, this also appeared on the Mesa Alliance website.